skip to main | skip to sidebar

A Planner's View of Notoriety

At work recently, I was given the challenge of finding a way to provide an evidence-based analysis of whether a liar can be forgiven.  This wasn't one of our clients, I hasten to add, but one of their competitors.  After a bit of plannery nurdling on Social Mention I came up with this chart, which plots the number of mentions against the number of mentions divided by the number of people doing the mentioning.  In other words, it makes a Boston Matrix of Visibility and Engagement.

To mix things up a bit, I charted up an eclectic mix of scandal-hit politicians, mass murderers and environmental disasters.

This is what I got. 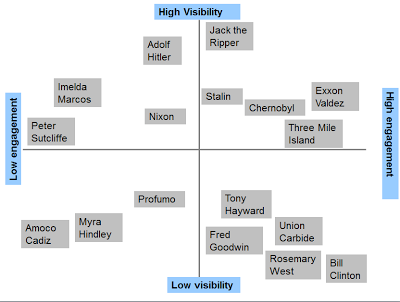 There are some fascinating observations here.  Firstly, let's look at the top left quadrant.  They're the people who get a lot of mentions but are low on engagement.  In other words, they tend to be one off mentions.  So it might be students tweeting that their teacher is a little Hitler, or a blogger comparing her shoe collection to that of Imelda Marcos.   I've done a similar market map on airlines and Ryan Air was right in the top left corner.  It's not a bad place to be - it means you're being talked about but there's no organised coalition against you.  But on the other hand, you don't have a loyal community of advocates in your corner.

The bottom left corner is where the bad guys go to die.  With low visibility and low engagement, they're not really on our radar.  It makes perfect sense that Profumo is here. By modern standards, it wasn't much of a scandal. Likewise, Myra Hindley has been dead for several years now.  She'll get a brief resurgence when Ian Brady dies but afterwards be consigned to the dustbin of history.

The top right corner is the highest levels of visibility AND engagement.  In other words, these get a lot of mentions but also a lot of people making those mentions, so they have large, active, vocal communities of interest clustered around them.  It's significant that Three Mile Island, Exxon Valdez and Chernobyl are in this quadrant - and generate more engagement than Stalin, Hitler and Nixon.  Even after all this time.

In the bottom right are the ones with low visibility but high engagement.  Bill Clinton's in the far corner of this quadrant, meaning that he doesn't have Hillary's profile, but he still has an energetic community of advocates and detractors centered around him.  The same goes for Fred 'The Shred' Goodwin and Tony 'I'd like my life back' Hayward - they don't generate the publicity they once did, but they are far from forgotten (and presumably, forgiven) for certain people.
Posted by Nicholine at 2:48 AM