skip to main | skip to sidebar

Is waste the new theft?

In times of plenty, there is no such thing as waste.  Few protested when the Victorian hunters decimated the wildlife in the pristine African and American wildernesses for sport.  As the 20th century progressed, nobody in their right mind questioned the need for televisions to have standby buttons, for cars to be fast or for razors and nappies to be disposable.   It wasn’t waste, it was profit and progress.  It was innovation.


Today, when we look at a well-lit motorway, a deli salad or a flushing toilet, we don’t see waste, we think how lucky we are to have so much choice and convenience, to have so many luxuries and labour saving devices at such reasonable prices.   We feel protected, pampered and proud.


At the same time, there’s a whole world of waste that consumers don’t see.  Until the recent horsemeat scandal, we would have only a vague idea that multiple ingredients were trafficked around the world and back to make a single burger.  We don’t see the entire harvests ploughed back into the field because they aren’t the right size or colour.  We don’t know that making a single gold ring can generate more than 20 tones of crushed rock that has been soaked in toxic chemicals including cyanide.  Nor do we realise that the water footprint of a half litre of soft drink is estimated to be between 170 and 310 litres depending on the origin of the ingredients.
We are relieved rather than annoyed when cinemas, swimming pools, planes and trains are half empty and love getting something for nothing with a buy-one-get-one-free offer.  It never occurs to us that the empty space or the free offer are a waste of resources, because we’ve paid for the bit we use.


Even when waste is right under our noses, we tend to give ourselves and others an easy ride as a sin of omission or a regrettable necessity.   For example, we are so fussy when we choose our fruit and vegetables that the supermarkets logically apply the same buying criteria with their suppliers. We are uncomfortably aware that we don’t need to drive around the corner and could easily walk, but we don’t have time.  We know that millions of gallons of water are lost every day through leaking pipes but we don’t want higher bills to pay for a wholesale upgrade to the sewerage system.   We can see for ourselves that household items are over-packaged but as long as we recycle, that solves the problem, doesn't it?


There are signs that this is changing.  Whilst activist groups and charities have started to campaign against waste, it has become a standard element of most companies’ Corporate and Social Responsibility that they reduce, reuse and recycle more.  There are campaigns to encourage greater prudence in consumer consumption and a growing general awareness of waste.  We fix dripping taps, tut about patio heaters and lavish floodlighting and happily endorse campaigns to end the scandal of throwing perfectly edible fish back into the sea dead to meet catch quotas.

After all, nature doesn’t waste.


But what we haven’t seen yet is any challenge to the view that waste is a victimless crime.  Like smoking in the 1990s, waste is increasingly seen as anti-social but not an actual offence.  Waste is expensive – we are starting to understand that – but it’s not against the law and until that happens there will always be people prepared to pay more to do it, or pay less instead of not doing it.  When a cup of coffee costs the same from a disposable paper cup or a consumer's own reusable cup, where's the incentive?
Perhaps one way to find a solution is to look back to a time when waste came under the double whammy of social censure and legal restriction.  With the advent of two world wars suddenly the resources that seemed so unlimited were dramatically curtailed and our island nation was forced to become largely self-sufficient.  Our burgeoning throw-away society became one of wasting and wanting not.  The US and UK’s Governments’ approach is still a brilliant study of mass behaviour change.  On the one hand, it quantified the benefits of reducing waste: 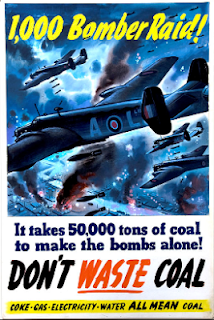 Whilst making it clear it what the consequences could ultimately be:

At the same time, it gave people the questions to ask themselves: 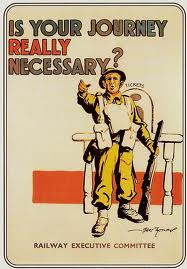 … whilst giving people step by step instructions on what to do and making it look fun and fulfilling at the same time.  Reducing waste was positioned as an exercise in creativity and self-expression, the opportunity to make something new and exciting to be worn with pleasure and pride. 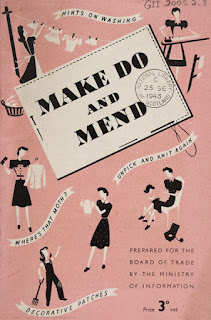 Side by side with this, the introduction of rationing was a great leveller – equating waste with injustice 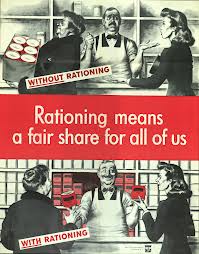 … and, as the black market developed and people grew weary of endless scraping and saving, eventually escalated into the portrayal of those who subverted the system as traitors, not spivs. 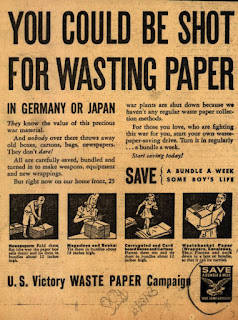 What this clearly shows is the war on waste needs to be fought on two fronts against a common enemy.  On the one hand, there needs to be policy and regulatory change.  Waste needs to be penalised, not necessarily with criminal charges (at first) but with higher costs, greater operational barriers and restrictions.   The penalties for waste could provide a useful source of revenue for national and local government in the same way that parking fines make a valuable contribution to council coffers which help to fund local schools, hospitals and other amenities.
If we apply this to say, the use of water, energy or paper, we might see a system whereby homes and businesses are allocated a ‘ration’ and need to give a good account of why they need more.  There needs to be a fundamental difference between this and the carbon trading system whereby companies can effectively pay a premium to neutralise their footprint.


On the other hand, there needs to be powerful cultural and social change to collectively drive, support and help enforce these new policies.  The public needs to be shown the hidden waste that’s all around us, the worst offenders named and shamed and conversely, those who are taking active steps to reduce it should be celebrated.  At the same time, people need to be told exactly what to do and be rewarded with stories and social status to recruit others to the cause.


If we look at more recent behaviour changing campaigns, it’s very interesting to see, for example, how the concept of the ‘enemy’ has changed over the years.  For example, the first ‘stop smoking’ adverts portrayed smokers as anti-social.  If you smoked, you were stupid, inconsiderate and possibly impotent.  Oh, and you stank, too.


But more recently, campaigns have shifted the blame away from the smoker to the cigarette as the enemy.  The cigarette became the punchbag, quite literally, for ex-smokers to attack.   So, in the war on waste, it won’t work to make the consumer the ‘villain’ but it could instead be the companies and public sector organisations who are cheating us, our communities and wider society in the interests of profit.


When it comes to giving consumers precise instructions on what to do, the ‘five a day’ campaign took the line that people already knew why they should eat more fruit and vegetables and focussed instead on creating an easy and simple plan for consumers to integrate into their everyday lives. The campaign for alcohol units took exactly the same ‘show and tell’ approach.  We can all count to 13.

Another approach used in the war, that of openly giving consumers the straight facts that they could then re-tell in their own conversations and use to justify their own decisions and behaviour, will need to be a key part of how brands tell their ‘waste reduction’ stories direct to consumers, not buried deep in a CSR report.   For example, McDonalds is already using this strategy as regards the provenance of the ingredients in its meals, giving them a prominent position on its website and optimising them for search on Google.


But bearing in mind that consumers don’t tell stories about brands but about themselves, companies will need to ensure that they help consumers to say ‘I don’t waste’, rather than ‘Brand X, which I buy, doesn’t waste’.


o, what history teaches us is that if waste is going to be the new theft, the consumer needs to be the victim not the villain.  The thief can be an attitude or a culture, a government or a company.  We can’t go around telling people they’re stealing from their community or society, or from each other but we can tell them that ‘others’ are stealing from them and it’s time to fight back. 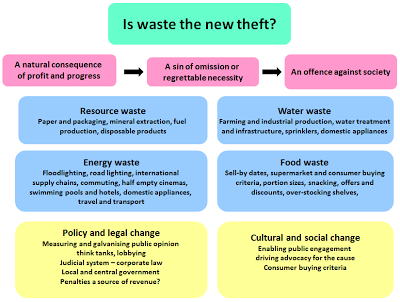 Posted by Nicholine at 7:41 AM